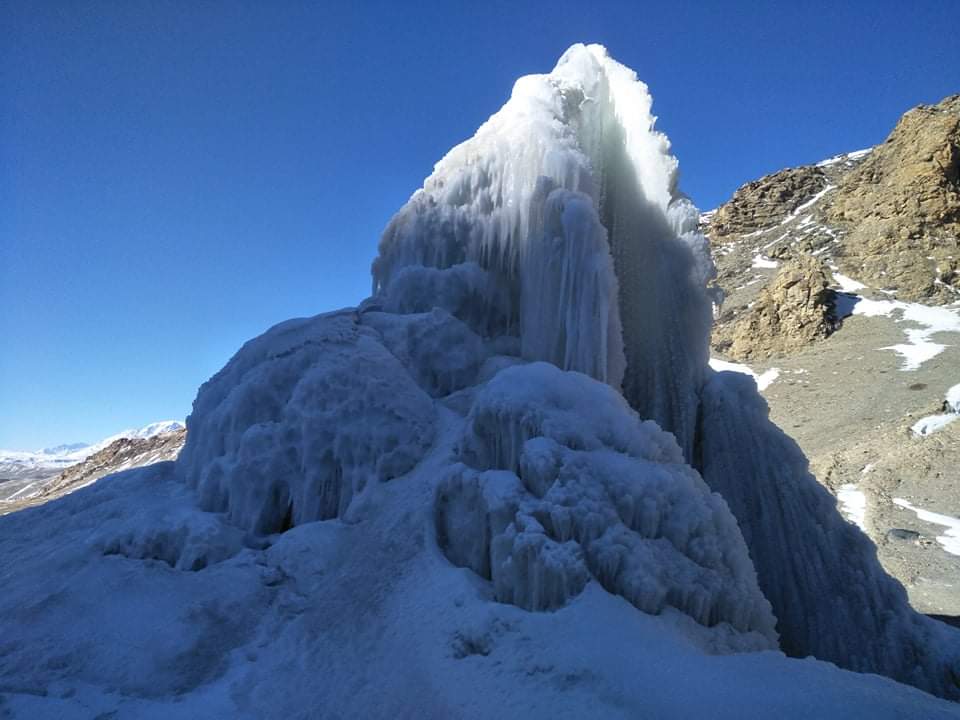 Ice Stupa Technology (www.icestupa.org) is the innovation of Mr. Sonam Wangchuk from Ladakh, India. In simple words, it is the process of making artificial glaciers to freeze and hold the water that keeps flowing and wasting away down the streams and into the rivers throughout the winter. Instead, these ices are collected on a dome shape that eventually melt in the springtime, just when the fields need watering. Ice Stupas are basically used as form of irrigation during dry seasons, but they are also being popular as a destination to promote green tourism.

Videh Foundation in collaboration with CharityClubber, technical support from HIAL (Himalayan Institute of Alternatives, Ladakh) and cooperation from the local government of Lomanthang Rural Municipality constructed the first official Ice Stupa in Nepal.

During the first week of December, 2021, in the Chhoser Village of Upper Mustang, our volunteers, the engineer from HIAL and the local youths of the village set up the dome (where actually the ices are collected and later turns into the Ice Stupa).

Ice Stupa was completely a new concept for the villagers and with our training and orientation they could learn the overall procedures of making, repairing and maintaining the same. We are really thankful to the team of Ladakh who supported us technically. The financing of the whole project was led by CharityClubber- a German based charitable organization.

It was actually a piloting thing for the villagers as well as for us. The successful implementation of the same was undoubtedly a challenge. Working in such Terrains is not easy either. With the spirit of teamwork and a quest for green initiatives Videh Foundation made it all happen.

There are many barren lands in the surroundings of Lomanthang (Upper Mustang) which has the possibilities of becoming green with the vegetation once these Ice Stupas are constructed and utilized. The local government seemed very positive with this whole project and they are ready to invest their money in future Ice Stupas.

Moreover, Nepal’s northern region has ample prospects for constructing Ice Stupas- which actually is not a high-end investment either- can support in agriculture for irrigation and work as a water reservoir in the dry seasons.

We are trying to navigate other possible areas to construct the Ice Stupa and support the villagers through this unique green initiatives.